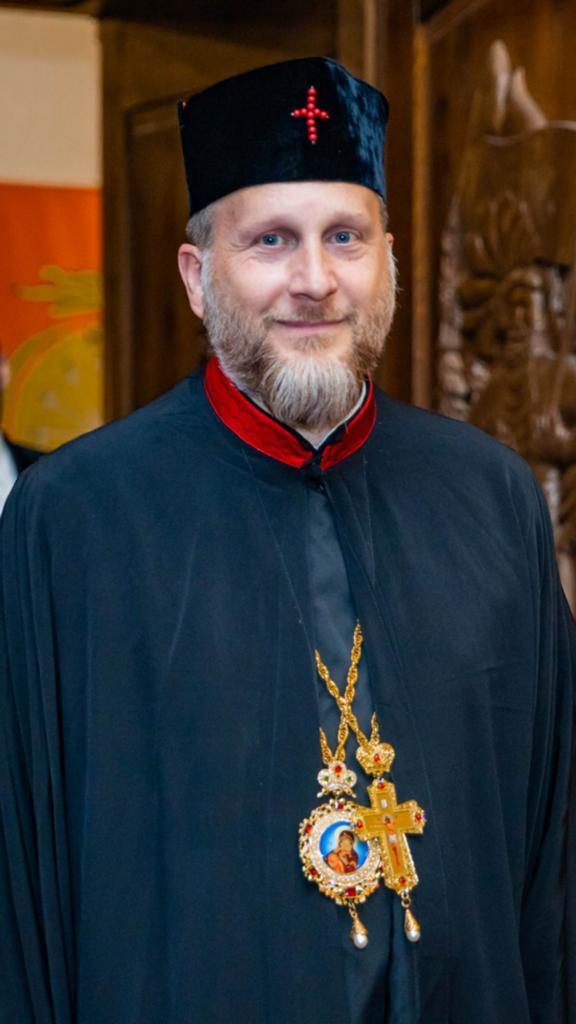 Metropolitan Archbishop Giovanni Luca, born Gianluca de Lucia, was born in Bordighera on 27 May 1978. He graduated in Accountancy in 2013 and obtained a Bachelor’s Degree in Theology from Saint Andrew Institute (USA).

A former Carabiniere Auxiliary with Medal of Merit, he was a political activist in Ventimiglia, town councillor from 2002 to 2010, former mayoral candidate and had the privilege of participating in the Italian Chamber of Deputies election in 2013, achieving a modest result (8997 valid votes).

In 2010/2011 he was a collaborator of the Prime Minister of Djibouti, a small state in the Horn of Africa, and thanks to this opportunity he became a member of the National Association of Collaborators and Ministers and Parliamentarians of France (ANCMP). He also managed three companies in West Africa in mining, transport and renewable technologies from 2015 to 2019.

For years, he has been residing in the Principality of Monaco and directs the Monegasque cult association called ‘Polish National Catolich Church à Monaco’, a mission of the Vetero-Catholic Policsh National Catolic Church of the same name, in full sacramental exchange with the Roman Catholic Church by the will of Saint John Paul II.

Since 2015, he has been Vice President of the Monegasque association called ‘Grand Priory of Russia – Commandery of Monaco’, an Orthodox Order of Malta, currently ecumenical.

Passionate about history and theology, he was fascinated by Seborga and its ancient Principality, so he decided to conduct historical-legal research on the evolution of Seborga and its Abbey Principality. Three years ago, he published an on-line study, which can be consulted at: https://castrumsepulchri.org

In 2019, he involved a group of enthusiasts in the re-establishment of the Monastic Order of Seborga and its Abbey.

On 29 September 2019, together with nine monks, he took two monastic vows for tertiary life: obedience and moderation. Following the Divine Liturgy, celebrated by the Reverend Father Gastone Bernacchi, secretary of the Italian Deanery of the P.N.C.C. and Vice President of the Monegasque cult organisation, P.N.C.C. in Monaco, the Reverend Father consecrated ten conversi (tertiary) monks, assisted by two Orthodox religious, in the spirit of ecumenical dialogue as laid down by the Apostle John. At the end of the consecration, His Most Reverend Highness Giovanni Luca, the new Prince-Abbot pro tempore of Seborga, was elected Abbot Commendatory of Seborga.

The newly converged monks established a monastic rule, de facto reconstituting the Abbey of Seborga in order to claim every right of the ancient Abbatial Principality.

The Monastic Order of Seborga is incardinated in the Monegasque P.N.C. cult organisation in Monaco, but since its constitution it has taken on a hybrid theological form that welcomes Catholics and Orthodox and is open to dialogue with all Christians of the world.

In order to comply with the rule adopted by the Order’s monks, the religious have decided to embark on an ecumenical path by welcoming two clerics from the Autocephalous Italian Orthodox Church called Antico Orientale, a church of pre-Chalcedonian extraction, founded by the distinguished Professor Alessandro Meluzzi.

On 1 November 2019, the Commendatory Abbot of Seborga was privileged to receive diaconal ordination, together with two other tertiary brothers. He then received Priestly Ordination in order to perfect his mission.

On that date, the clerics and monks of the Abbey of Seborga adopted the new Constitution of the reconstituted Abbey Principality of Seborga, abrogating that adopted by the constituent monks in 1261 and subsequent amendments.

The Abbatial Principality of Seborga fell into “dormant” status from 29 January 1729, the date on which the sale of all rights over Seborga by the legatine monks of the Island of Lerino to the King of Sardinia was instituted, until 28 December 2019, the date of its formal reactivation.

On 13 November 2021, in the enchanting setting of Viglas Castle in Slovakia, His Most Reverend Highness re-consecrated the Order of the Dragon, an ancient chivalric oridine created by Emperor Sigismund of Luxembourg in 1408. On this occasion, the new Grand Master, His Excellency Baron Daniel von Rechitar, descendant of Elisebetta of Luxembourg, together with his knights and ladies, was installed by the Grand Master as Sacristan of the Order.

His Most Reverend Highness John Luke carried out several studies concerning Orthodoxy, in particular the canons of the First Great Councils of the Church of Christ, confirming to adopt the Orthodox confession as a choice of life, accepting the canons of the Councils of Nicaea, Ephesus, Chalcedon up to the Council of Trullan.
This choice was necessary in order to recognise the regularity of the married clergy, especially bishops, who in Chalcedonian churches, whether Catholic or Orthodox, are exclusively monks with the obligation of celibacy.

On 20 February 2022, the Prince-Abate of Seborga was consecrated Bishop by His Eminence Theodore, Bishop of Heraclea and Primate of the Italian Autonomous Orthodox Church, born from the U.A.O.C. – Patriarchate of Kiev. Hence he has the regular Apostolic Succession of the Patriarchate of Kiev, now recognised by the Ecumenical Patriarchate of Constantinople, through the Tomos of Autocephaly.

His Most Reverend Highness, since the date of the re-establishment of the Monastic Order of Seborga, wishes to consolidate the work that the public administrators and the late Giorgio Carbone, promoter of the idea to revive the Principality of Seborga, have tried to create, through the presentation of a programme for the economic, tourist and cultural development of Seborga with the following objectives to be achieved, in harmony with the Local Administrative Authorities and the Italian Government

– Call for the installation of ATM cash dispensers, indispensable for local commercial development;

– Create a Digital Currency, guaranteed by gold and patrimonial reserves of known profitability, inspired by the “Luigino” currency that was instituted in Seborga in 1666 until 1669;

– Identifying and designing an area for an eco-sustainable and green housing settlement called “Griffon Village”;

– Relaunch Culture and Tourism through the implementation of a Programme of Planned Annual Events by the Cultural Association “La Vela Bianca”;

– Redevelop the Territory through the Recovery of the Existing Agricultural Heritage;

– To define the implementation of a European Project for the Cableway Connection with Ospedaletti and its Port Area;

– To define the implementation of a European Project for a Heliport Link with the Principality of Monaco and Nice Airport;

Particularly in this cosmopolitan era, being a European citizen is a strength and not a disadvantage, even if we continue to claim autonomy from the Italian State. The conception and presentation of projects aimed at obtaining European and Italian funding may favour the economic growth of Seborga.

His Most Reverend Highness invites you to take part in the events organised by the cultural association called “la Vela Bianca dell’Antico Principato di Seborga” in order to get to know each other better and to share the daily project of reconstituting the Abbey Principality of Seborga.